Being located in Brgy Tangub Alijis Road, Camella Homes Bacolod South is easily accessible. Via commute, you can easily get here through a public utility jeepney. Take one with the route Handuman via the Circumferential Road and you’ll get to the residence. If you’re going here by a tricycle, you can just aboard one in the Alijis Junction and tell the driver to drop you off the Circumferential Road where the project is.

Now if you’re taking a private vehicle, all you need is to drive along the Circumferential Road to get to the housing project.  Alternatively, you can take the Araneta to the Alijis Rd. to the Circumferential Rd. to get here.
If you were asking, “Is the project near schools, churches and malls?”  Yes, it is! In the following, let us highlight certain landmarks and key places to find close by the property.

What are the malls and shopping centers near the residence?   There are many of them. A few include the SM City Bacolod, 888 China Town Square Complex, The District - North Point, Ayala Malls Capitol Central and Metro Plaza. The list does not end there, though. Some also include the Mayfair Plaza, Robinsons Malls, Citymall, Centroplex and New City Mall Building.

Others are the Metrodome, Robinsons Place Bacolod, Libertad Mall, Lopue's East Centre, VSB Mall, Triangle Island Plaza, Citymall - Goldenfields Bacolod and Goldenfield South Side. Buying a property, you must also consider its nearness to educational institutions or schools. There are many of them to find in the Camella south homes.  Some include the Cosmopolitan Christian School, St. Sebastian International School, Jack & Jill School Homesite, Bacolod City National High School, St. Joseph School-La Salle and Megumi Academy.

Regarding medical and healthcare, Bacolod City has some of the finest in the country. A few of these hospitals and medical centers include the The Doctors Hospital, Inc, Metro Bacolod Hospital and Medical Center, Adventist Medical Center and Corazon Locsin Montelibano Memorial Regional Hospital.

In addition, there is the Hospital Avenue Diagnostic Center, Corazon Locsin Montelibano Memorial Regional Hospital and Adonis A. Guancia, Md Dr. Pablo O. Torre Memorial Hospital. For places of worship, there are many to find near the community. A few of these include the San Sebastian Cathedral, Bacolod Evangelical Church, San Antonio Abad Parish and Redemptorist Church. 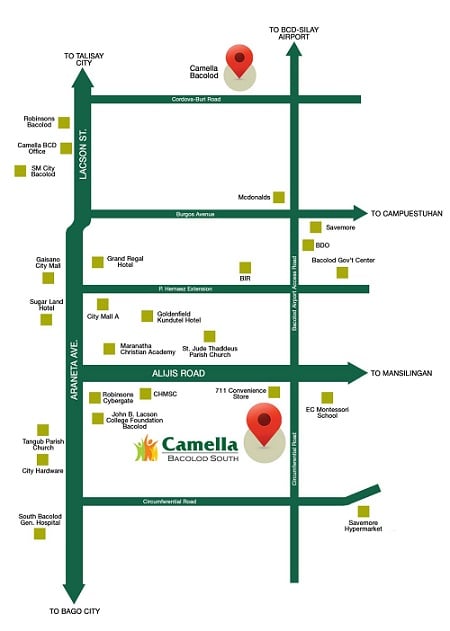